Meet the 2018 Hawkinson Scholarship recipients—undergraduate and graduate students who are accomplishing amazing things.

Puleng Moshele is a 2016 graduate of Macalester College, currently pursuing a master’s degree in public health with a focus on industrial hygiene at the University of Minnesota. Born in Lesotho, she studied International Baccalaureate courses at the United World College in Swaziland where she learned about global citizenship – the idea that everyone has rights and responsibilities as citizens of the world, with whole-world sensibilities, rather than as citizens of a particular nation.

Lesotho is one of the world’s poorest countries and has the lowest life expectancy in the world. Nearly a quarter of its people are affected by AIDS/HIV. Too often, children find themselves running the household as their parents get sick and die. Responding to the devastation caused by AIDS/HIV, Puleng studied biology at Macalester to learn the biological basis of the disease, and then worked at a Univ. of Minnesota laboratory on improving HIV therapy. To gain a broader perspective on the disease, she provided direct compassionate care for a year to AIDS patients at Clare Housing in Minneapolis where she learned how AIDS treatment is often complicated by mental illness and chemical dependency. In addition, she has served as a mentor at an orphanage in Lesotho and raised funds to support sustainable poultry farming there.

Because Puleng’s father died while working in a South African mine, her intermediate plans are to use her knowledge of industrial hygiene in a government or industry job to help miners and then obtain a PhD and teach at a university in Lesotho. That focus and training would be unique in Lesotho.

Puleng emphasizes how fortunate she is now to ‘live a dream’ and be able to return to help the people of her country. Reflecting on her interest in public health, Puleng wrote:

When Isabel Arriagada was a law school intern, she experienced the Chilean prison system first hand, learning about the hardships prisoners endured and the mutual support networks developed by their families. The difficulty of raising issues about prisoner mistreatment is common in prisons everywhere. But Chile has one of the highest imprisonment rates relative to crime in the world and even the Chilean Supreme Court has reported widespread abuse, torture and massive overcrowding. In 2013, public defenders created a government program called penitentiary defenders to help report abuse. Isabel’s PhD research will investigate how effective this program has been. Joshua Page, Associate Professor of Sociology at the University of Minnesota, is Isabel’s academic advisor. He explained:

Isabel’s dissertation seeks to find out if (and how) the system works. Are the state lawyers able to build trust with prisoners? Are the lawyers able to get relief for prisoners? How do the lawyers (and their supporters in the government) overcome resistance from prison staff and other groups that do not support their work? Through interviews, direct observation, and archival research, Isabel will produce the first systematic study of this critical policy intervention. …

Isabel is very well positioned to conduct this research. … [Isabel has already] designed, carried out, and published cutting edge research on criminal punishment and inequality.

Her strong commitment to social justice is at the heart of her dissertation project.

In 2014, Isabel worked with a group of lawyers, sociologists, and journalists to organize LEASUR, the first non-governmental organization in Chile to provide free legal assistance to prisoners and their families. LEASURE also seeks to change penal policies through legal action, political pressure, and educational campaigns (www.leasur.cl). Isabel was elected the first director in 2014. She described her experience:

As members of LEASUR we have studied cases of torture and helped inmates with terminal diseases apply for early release. As part of my outreach activities, I have presented in conferences, published research and journal articles for national and international media, taught inmates and their families about their rights, and participated in different legal initiatives. I also had the opportunity to lead a team of researchers to write the Human Rights Report of Chilean Prisons in 2014. Currently, more than 50 volunteers – students and professionals – from different disciplines and social backgrounds are involved in LEASUR’s cause.

Isabel came to the US in 2015 to pursue a PhD in Sociology at the University of Minnesota. Since then, she has engaged in several academic activities, including: 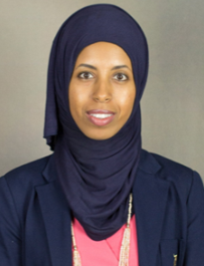 Najaha was born in Ethiopia and immigrated to Minnesota with her family at age 7. The oldest of eight children, she began her formal education in third grade. She completed the International Baccalaureate program at Harding High School in St. Paul before attending St. Olaf College (B.A. 2017). She is in her second year at Edward Via College of Osteopathic Medicine.

Dr. Sentayehu Bedane, MD, MPH, board chair of the International Oromo Health Professionals Association, and county-wide services manager for the Dekalb County Board of Health, Atlanta, Georgia, wrote that Najaha has been “an ardent advocate of peace and justice all her life, starting from a very early age” [for example, volunteering at Red Cross blood drives at age 11]; her involvement in peace and social justice activities was the very reason for her decision to study medicine. He continued:

She is an embodiment of what volunteerism is all about. She gives back to the underserved, while raising two young boys as a single mother and pursuing her dreams of becoming a medical doctor. It is fascinating to observe her juggling between various roles and responsibilities as a mother, a volunteer, and a medical student, and get it all done with diligence, efficiency, and effectiveness. Her volunteer services range from tutoring high school students on career choices, college applications, and scholarship opportunities, to providing first aid services during the annual Oromo soccer tournament, and serving on the Board of Directors of the International Oromo Health Professionals Association (IHOPA). …. The fact that Najaha is the youngest and the only medical student to be elected to the board of directors for IHOPA is a testament to her integrity, dedication and character.

While her immediate plans are to practice medicine, in the longer term Najaha wants to address health care disparities for marginalized communities and advocate for accessible, affordable health care. She serves as an ambassador for the American Osteopathic Association to the Harvard-based NGO Equal Health which aims to sensitize medical professionals about the socio-economic determinants of health in under-developed countries. As an intern for the Minnesota Department of Health and as a board member of IOHPA, she has learned that there are systemic levers that significantly affect clinical outcomes. For example, adverse childhood experiences (with which she is personally familiar) are risk factors for later health and success as an adult. She appreciates the complexity of interactions among health outcomes, education, transportation and housing.

Najaha says her faith has shaped her beliefs, values and principles – and points to Mohammed as her inspiration. For example, she quotes the Prophet: “Speak with the wise but walk with the poor.”

Accordingly, she helped organize a Big Brothers Big Sisters program for Oromo youth. She is eager for opportunities to learn from those who are different from her, especially people who have had no previous contact with Muslim women. She also finds ways to give back to those who have helped her along the way: as a Horatio Alger Minnesota State Scholarship Award recipient and by helping the St. Olaf Alumni Association. 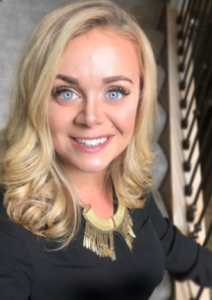 Rachael Reiling’s mother followed a male school teacher from Minnesota to California into a life of prostitution and chemical dependency beginning at age 16. As the oldest of her mother’s six children (each with a different father) Rachael filled in at a young age to provide stability for her siblings.

Now, despite the demands of work (as business development manager for Spire Credit Union), family (as wife and mother of two children) and study (pursuing a bachelor’s degree in business administration at Saint Mary’s University of Minnesota), Rachael uses her vacation time to concentrate on the challenge of sex trafficking:

FFW currently serves 250 women with young children who were brought to Bangkok from Europe or Africa for prostitution, became pregnant, and then were abandoned by their abductors. FFW helps the women with housing, food, job training, education, treatment for PTSD, and health care for themselves and their children. Surprised by the large number of Africans, Rachael heard a version of this story repeatedly: a girl in a rural African village is molested by an uncle. She complains, but her family sends her away rather than confront the uncle. While boys are valued for future labor (herders or farming), girls are both a current expense (another mouth to feed) and a future expense (dowry required). So the family sells her. Arriving in Bangkok without money, passport or connections, the girl is later abandoned if she becomes pregnant.

Bringing her lessons back home, Rachael has continued to stay in touch with both organizations, sending supplies and editing educational materials. She was sponsored by World Endeavors, which offers international volunteer projects. Following her Thailand trip, she met with prospective World Endeavors volunteers to explain the challenges and opportunities they would face. After 8 months, one person accepted the challenge to continue Rachael’s work there.

As her children grow up, Rachael hopes to involve them in these ‘family adventures.’ Her attitude is that everyone owes something to the community – find a niche and pursue a passion.