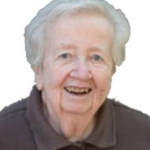 When Sister Char Madigan was teaching at St. Margaret’s Academy in Minneapolis, she emphasized love of God and neighbor without distinction. She knew this couldn’t be taught in a classroom and needed to get her students connected to neighbors, including the poor people all around them. She also knew that she couldn’t simply send out the students so she volunteered at the Church of St. Stephen. Soon St. Stephen’s hired her to offer a program for the poor and homeless.

At St. Stephen’s, she realized she was saying goodbye to people at the end of her day, knowing they had no place to go. At about the same time Sister Rita Steinhagen was working with another organization and saw many women and their children who had no place to go at night. Together the two nuns started St. Joseph’s House in 1977, a women’s shelter in the Phillips neighborhood. Guests in crisis now had a haven to begin to piece together their lives. A decade later St. Joseph’s House changed its name to Hope Community. It began restoring boarded-up housing , one at a time, and today counts more than 300 units. It also developed playgrounds, community spaces, two businesses, three gardens, and learning and leadership opportunities for thousands of neighbors. The plaques on the office wall at Hope Community’s headquarters recognize everything from its architecture to its community-police partnerships.

In the 1980’s Sister Char and Sister Rita joined Marv Davidov in the Honeywell Project, a peace group that confronted the Honeywell Corporation for its manufacture of nuclear missile guidance components and its deadly cluster bombs. Sister Char went to jail numerous times. On trial, she always talked about Catholic Worker values, describing how money was misappropriated and shifted from dire community needs to war profiteering and about the need for nonviolent resistance. These activities led to the start of weekly vigils in 1996 outside the headquarters of Alliant Techsystems, a spin-off of Honeywell that made anti-personnel landmines, cluster bombs, depleted uranium weapons and components for nuclear weapons. In turn, the vigils led to the creation of Alliant ACTION in 1998. Sr. Char continues to respond to current calls for justice as an active member of the Spirit of St. Stephen’s Catholic Community.

“Homelessness is just the tip of the iceberg. More than bricks and mortar, people need commu­nity. I believe with all my heart that the antidote to violence is community … and dignity … sense of self-worth. Just “cracking down” on things we don’t like doesn’t solve the problem. Kings and cops and prisons tend to deepen the sense of domination. The way to peace is through peace. Jesus knew that and it is still our best hope for a loving world.